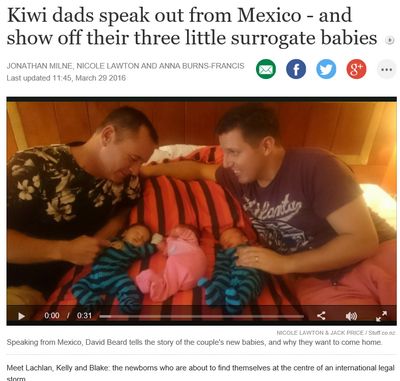 Bob McCoskrie – National Director
The recent media coverage of the same-sex couple who travelled to Mexico to have ‘triplings’ raises a number of issues. Three babies, born from one set of sperm and one egg, but carried by different surrogates, was bound to bring difficulties.

And then there is the coverage of a surrogate offering to be impregnated with a dead kiwi teenage filmmaker’s sperm. The media report says that the offers have “breathed life” into the grieving mother’s dreams of “creating a grandchild“.

While sympathising with adults who cannot have children and understanding why some consider going to extreme lengths in order to have children (and grandchildren), surrogacy cannot be in the best interests of the child.

What is it like to be a child and know that you were ‘bought and sold’? Can the child be blamed for feeling disturbed that money was exchanged in their conception? How does the child deal with the loss and rejection from a biological mother who is labelled as the ‘gestational carrier’? What is it like to find out that your biological father donated his sperm and is known only by a number?

Children have a deep longing and a right to know who they belong to, where they come from, and who they look like.

Australian commentator Miranda Devine argues that “to have carried a baby in your womb, shared a blood supply, felt its little feet kick against your abdomen, heard its little heartbeat, sensed it growing bigger and stronger, while it changes your metabolism, and the way you sleep, breathe and eat, and then to have given birth to a living, breathing human child you have been longing to cuddle is not a trivial act. So to have it described in such clinical, remote terms is insensitive and thoughtless, to say the least. It is so much more than being ‘born through a gestational carrier’...”

Commercial surrogacy must lead to the commodification of children. There is something ethically questionable about the very notion of “renting a womb.”

Women are not Easy Bake Ovens
and our children are not cupcakes.
Jennifer Lahl, President of The Center for Bioethics and Culture

In December 2015, the European Parliament adopted a resolution condemning “the practice of surrogacy, which undermines the human dignity of the woman since her body and its reproductive functions are used as a commodity…”

Clearly commercial surrogacy can be exploitative. The contracting parties are seldom equal. It treats women and children as tradable objects, whether or not payment is rendered. Some argue that commercial surrogacy is a form of human trafficking. The women most at risk are poor and vulnerable women, easily tempted by financial incentives.

Surrogacy and IVF opens the door to sex-selection and the prospective designing of children. A surrogate mother was ordered to abort a baby in the USA after learning she was having triplets, and a Melbourne couple using IVF aborted twin boys because they already had three sons and wanted a daughter instead. The father told the media it was “our right” to decide the gender of their future child. 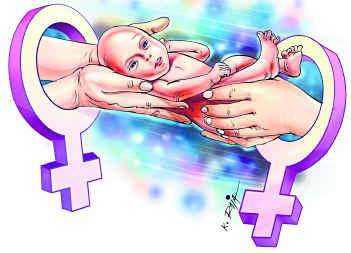 The documentary Breeders: A Subclass of Women? with the stories of four surrogate mothers, reveals a much darker and more serious side to the whole industry. Angelia Robinson, 51, agreed to carry twins for her brother and his male partner. But the arrangement turned sour and degenerated into a three-year legal stoush where she was legally recognised as the twin girls’ mother, and later given limited custody. She admitted: “Everything is focused on the people that can’t have children. Nothing is focused on the children themselves or the breeding class of women we’re creating.”

Surrogate mothers are at risk of emotional trauma and psychological burden. Surrogacy, even when done altruistically, can create lifelong emotional issues for both. Deep bonds are formed between mother and child during gestation and the inability of some surrogate mothers to relinquish their babies has resulted in excruciating levels of anguish for the surrogate, and often in high-profile lawsuits.

Gammy was born to a Thai surrogate mother, and believed to be abandoned by his Australian parents after they discovered he had Down Syndrome. But it was later revealed that the surrogate mother had “fallen in love with the twins she was carrying and decided she was going to keep the boy”.

Surrogacy can also endanger women’s health. There are various health complications with any pregnancy, but there are many surrogacy-specific health risks.

Our Mexico ‘tripling’ case is a warning that legal liabilities readily develop due to the unknown outcome of a host of factors, including multiple births, incurring unforeseen medical costs due to complications, payment issues, coercion to abort one or more of the children, custody battles, and the abandonment of children by sponsors mid-gestation.

Although largely ignored by the media, the rights of the child should remain paramount. Many children conceived via surrogacy are prevented from knowing intimate aspects of their heritage and biology.

Surrogacy isn’t as simple as it seems.

As Jennifer Lahl, the President of The Center for Bioethics and Culture in the U.S. rightly says – “Women are not Easy Bake Ovens and our children are not cupcakes.”

Acknowledgement:
The term “Eggsploitation” comes from the title of a documentary film by
The Center For Bioethics And Culture. http://www.eggsploitation.com/